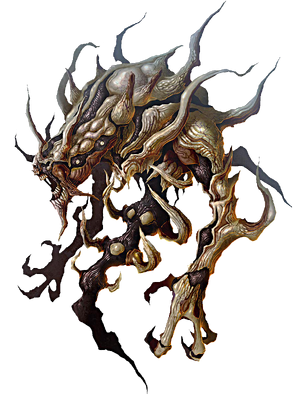 "You said we'd be together forever!"

Zeron's Final Form (Bado Shub-Niggurath) is the last Master hideous appearance after she lost her power and, possibly, what Elena is going to transform into if she doesn't eat Monster Flesh in time to stop the mutation.

After all her master flesh has been damaged to the point of no return, Zeron starts to fade away and dissolves just before she can reach Aeron, screaming that he promised to her that "they would have been together forever" (however that promise was for Elena and not for her). Soon after Aeron, Elena and Mavda are leaving,

Zeron, now that she has left the girl's body, manifests herself in as a gigantic screaming creature and goes after them. As she follows them down the staircase of the Centrum by crawling, she constantly tries to grab Aeron and eat him, but her attempts keep failing. As the man reaches the bottom of the stairs, the creature grabs him one last time, trying to devour him once and for all. Aeron promptly shoots the Oraclos Chain chain in the monster's mouth, wich makes her retrac in pain losing her grip on the man. As Aeron falls down from Zeron's hand, while it was lifted in the air, losing consciousness because of the fall, the

creature looses balance and starts to fall down. Elena runs to Aeron to help him, but the monster reacquire balance for a second trying to reach for the two of them, ultimately losing her grip on the stairs. While she falls down, Zeron's hand hits Elena who falls down along with the creature. The bond between Aeron and Elena wakes him up as he hears her beloved calling is name. When he recovers he sees Elena screaming his name for help while she's about to plunge to her death, but Mavda quickly tells him to use the chain. Aeron runs to the edge of the stairs with a scream of desperation activating the bow mechanism on his arm and shooting the chain at the girl so she can grab it. Aeron successfully saves Elena, while the creature falls down to her death, and runs away with her while Mavda closes the Scar forever with the full power of the Oraclos Chain. Zeron corpse lies dead on the bottom floor of the Towers , just a little distant from her son's toy, while everything around her starts to crumble.

The creature is gigantic, possibly the biggest Master. Her body is a mixture of purple and orange like flesh and white bone like skin and is surrounded by a red-pinkish aura, while it constantly oozes a purple liquid. She hasn't a lower body but a long distorted spinal column, thus she uses her claws to crawl rather quickly. Her hands are rather big compared to the rest of her body and resemble those of previous masters. Her neck is abnormally elongated and her face resemble half a human head, lacking hairs and eyebrows with totally white eyes. Her lower jaw is disproportionate compared to the upper one and doesn't actually work as a mouth. Her head has inside another set of teeth wich actually function as a proper mouth, being capable of opening and closing. Both her head and back present a series of horns of the same material as her skin. She constantly screams with a distorted voice the same phrases "Aeron!" and "You said we'd be together forever!", the last words she said before dissolve in her previous form. Despite representing the dark side of elements, Zeron first form, the "female one", has actually a lighter appearence than her true one, the "male one" (such consideration could be made even with the other masters, but here the contrast is strongly implied).

The fight with the creature is actually a run section plus a series QTE, depending how fast Aeron is going. If all projectile the monster shoots are dodged, there's going to be only two QTE at the end of the track. As Zeron follows Aeron down the stairs all that there is to do is to avoid her purple projectile and keep running. If Aeron gets hit he will get stunned and thus lose speed, letting the monster chatch up. When this happens, usually after being hit by 2 pojectiles, a QTE will be played, failing it will make the entire section replay from the start. At the end of the stairs Zeron will atumoatically reach Aeron and another QTE will play, once again failing it will make the scene replay from the start. After the cutscene the last QTE will require to shoot the chain at Elena, if it is failed the sequence will restart with the cutscene before the QTE itself.

Ooze Projectiles: this claw shaped projectile will constantly come out from Zeron body aiming for Aeron. If he gets hit multiple times the creature will catch up and grab him.

Deadly Grab: if Zeron reaches Aeron she will grab him trapping between her hand, preparing to devour him. Following the screen prompt (move the analog stick and press A repeatedly) will let Aeron free and the run will continue. No matter how many time Aeron gets grabber, he will always be able to free himself using the screen prompt.

Last Bite: when Aeron reaches the bottom of the stairs, Zeron will reach him and try to eat him one last time. Following the screen prompt (press B) will end the battle.