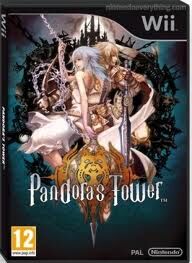 Pandora's Tower (パンドラの塔 君のもとへ帰るまで Pandora no Tō: Kimi no Moto e Kaeru Made, lit. Pandora's Tower: Until I Return to Your Side) is a Japanese Action-RPG for the Nintendo Wii. It was developed by Ganbarion and published by Nintendo. The game has multiple endings, which change according to the unique affinity system.

Pandora's Tower is one of the three games which are part of Operation Rainfall. It was never going to be released in America, so fans created Operation Rainfall to persuade Nintendo of America to localize three games. XSEED Games announced on January 17, 2013 that it will publish the game in North America, even after the operation campaign gave up its efforts.

Pandora's Tower tells the story of a young man, Aeron, who must travel to 13 different towers, collecting the hearts of monsters to feed a young girl, Elena, who was cursed. If she does not eat the meat, she will become a beast herself. The story takes place in the kingdom of Elyria, in the year 511 of the Unified Era.

The game has six possible different endings. The ending will be decided depending on Aeron's relationship with Elena by the end of the game. Ways to increase their relationship include returning to Elena quicker, spending time with her instead of going through the towers, and giving her gifts that you find in the towers or you bought. For example, you can choose what you do with the items you find in the towers: you can choose to use it to upgrade your weapons, or you can give it to Elena to improve your relationship.

Two English trailers were released shortly before the game's release. View them on the Trailers page.