Masters of the Blacklight Barbican 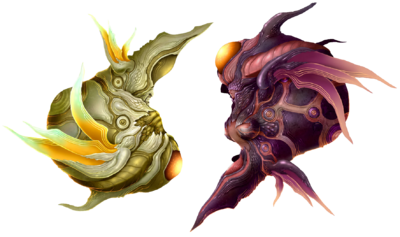 The eleventh and twelfth Masters, the Masters of Dawn Tower (Aserte hade Rahu) and Dusk Tower (Aserte kilte Ketu), are fought at the same time; this means that before you can actually begin the fight you are required to destroy all four chains in both of these Towers. The Masters are opposites, for there are two Towers of each element (one for the light side and one for the dark side) and these Masters are the light and dark Masters. You must use their own attacks to defeat them. Also, when you have defeated one Master, if you don't defeat the other Master fairly quickly then it will just revive the one you have already downed.

When you first enter through the Master's door, you will enter from either the Dawn Tower or the Dusk Tower. Either way, after walking down a corridor you will find a door to the Masters' chamber. Inside you will see one of the Masters (depending on which Tower you entered from) stuck in a wall, revealing its Master Flesh. Once you start pulling at its Master Flesh it will start taking damage, but at the same time the wall will begin to crack. Eventually the wall will break, and the Master will be freed. There will be another wall behind it, which holds the other Master. However, before you can do anything the Master will send you back to outside the Master's door. You cannot start the actual fight until you have entered the other door and freed that Master too.

Go through the nearby portal to the other Tower and enter the Master's chamber from that Tower. Again, you will find a Master stuck in a wall. However, once this wall breaks, there are no more walls, and the fight begins with both Masters. From here on both Masters' Master Flesh will be covered, and the only way to reach them is by using the other Master's attacks to hurt it.

Another way to reveal the Master Flesh of the Masters is to use the stones found in the Blacklight Barbican on the opposite Master. Use the Shade stone or Stygian stone to attack the Dawn Tower Master and the Light stone or Luminous stone to attack the Dusk Tower Master. It is ideal to use these stones after one Master has been defeated and you can no longer use that Master's attacks on the remaining one. If you hit either Master with their own element, it will regenerate the shield around their Master Flesh. This goes for using the same type of stone on one of the Masters, or throwing one of their own swords at them.

TIP: I found this boss really easy. I'd recommend defeating the Dusk Master first, you can get ample time to damage it when the Dawn Master is charging for it's multiple beam attack.

Each Master only has two or three attacks, but when you are facing two at once who are both attacking you, that is hard enough. It is possible to tell which Master used a certain attack by its colour.

The Master of the Dawn Tower's second attack is a beam of light which it will shoot at you. This will also help reveal the Dusk Tower Master's Master Flesh if you stand behind it. This attack has an extremely long charging time, and isn't very hard to dodge, so it is a good time to either line it up with the Dusk Master or to throw the swords.

The Master of the Dusk Tower's second attack is a dark circle on the ground which will move towards you. I'm not sure what it does if it catches up to you, but it is extremely easy to avoid, while damaging the Dawn Master upon contact.

The Masters also have a joint attack, although it is more of an evasive maneuver. The two will stand apart from each other and a few trails of electricity will connect the two, before they switch places. This doesn't do much, but it can be annoying when trying to move the black shadow into the Dawn Master.

As far as I'm aware, these two Masters don't have a half-health power up, for there are two and they can revive each other at full health, which defeats the point for the power-up anyway.