Master of the Wellspring Steeple 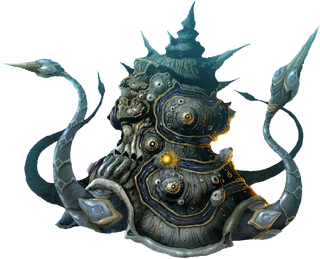 The Master of the Wellspring Steeple (Tres Aegir) is a large squid thing with a shell covering its entire body. There are many eyes sticking out of the armour. Like always, the fight will begin once you attack it.

While it can seem a difficult Master to start with, this Master has many weaknesses that are discovered as you play on. If you can exploit all of its weaknesses, then you should be able to dodge many of its attacks.

Its ways of attacking are numerous, but the biggest threat is its eyes. They will shoot powerful streams of water at you. You will have a slight warning, since it will begin the stream, pause, then move the stream either outwards from its body or across its body. Both of these ways are extremely dangerous if you are currently grappled to the Master Flesh, since by the time you release the Oraclos Chain it will have hit you. There is no easy way to avoid this, but you can temporarily take the eyes out of action, giving you extra time to tug on its Master Flesh. If you Chain Shot its eyes, they will close for a little while. If you time your Chain Shots well, you can take out up to 5 eyes at a time.

Also following the blue path are a number of little rock things. These will spew blue energy waves (in want of a better term) that move through the air towards you. If there is one of these anywhere near you there is no point trying to do anything other than run. If you are grappled onto the Master Flesh then release it quickly. In the time it takes you to Chain Shot an eye, one of these will catch up to you. There is no way to stop the rocks that cause these waves, but you can Chain Shot or even simple grapple these energy waves in the air, making them disappear.

Once you get this Master down past roughly half health, it will pull its tentacles out of the ground, giving it another two ways to attack. However, this can be a good thing. It can also start moving around completely, so be careful not to get cornered.

One of the tentacle attacks is where it slams them down on the ground in a sort of frenzy. This is easy to avoid, and it is an absolutely brilliant time to deal heaps of damage. The Master Flesh stops moving when it does this, and it ceases all other attacks. If you just stand in between two of the four tentacles, you can grapple and pull the Master Flesh as much as you like. This is probably a better time to yank, since you will do more damage and you should be able to get at least three yanks in, dealing a heap of damage.

The final attack is one where it pulls one of its four tentacles in and prepares for a lash-out attack. This attack is the attack to worry about the least, since its range is terrible and you can just walk back a bit to avoid it. Also, it spends ages preparing, so no one can complain about lack of warning. This is a good time to Chain Shot its eyes.