Master of the Ironclad Turret 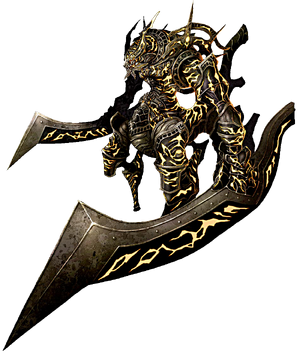 The Master of the Ironclad Turret (Hamushte Jābir) is a centaur-like thing with two legs. Unlike the previous Masters it doesn't hesitate to start attacking you. It will drop down from the ceiling after you jump onto the circular platform.

This Master is the hardest one yet, without a doubt. It is also the first Master that requires you to use your main weapon, not just the Oraclos Chain.

Its Master Flesh is very hard to get to, and it can take a while to work out how to reveal it. The text about the Master found in the Tower complains about how it overheats itself when moving or suffering external attacks. This is true. By attacking it with your main weapon it will heat up, turning fiery at times. It will eventually overheat itself, but it's better to attack it. Once it heats up enough, it will collapse, exposing its Master Flesh on its stomach. It is best to grapple and pull in this fight, for once you yank it out or release it it will get up. After almost half of it's life is out it will start to use it's tail to expel the heat. To prevent this, just grab his tail and pull it, it will make the heat stay on his body, and will give you a brief moment to attack.

When attacking it, try to stay behind it, since not many attacks will hit you then. Also, when it is doing its slashes, it is a good strategy to stand between it and the rock that will be somewhere in the area. If you move out of the way and it hits the rock, its sword will get stuck, leaving it open for you to attack for a short time.

This section needs more work. There are other attacks I've forgotten and attacks that need more detail.

Its most common attack is simply to land a blow in front of it, often making two to four blows in a row. If you manage to stay behind it most of the time, then these should be fairly easy to avoid.

If you stand at a distance in front of the Master, it will cross its arms then dash at you after a short delay. Try to stand close to the ledge when it does this, and dash out of the way. The Master will fall and hang off the ledge, while it tries to climb back up it is open to your attacks.

After it's health has reached halfway, it will get stronger, like the other Masters.

If you are staying behind it, then their is one attack to be careful of. It will raise its behind, preparing for a few seconds, and then it will blow fire out of its behind for a few seconds. There is plenty of warning, so this is easy to avoid. You can chain grab its tail when it does this to make it keep its heat level and on occasion expose its Master Flesh.

One of its new attacks is where it slams the ground with its front feet, destroying the current rock on the field, making a new one fall down and making you unable to move. There is no way to avoid this (that I know of,) but if you aren't too close to the Master it shouldn't have enough time to attack you before you can move again.

There's one other attack but I'm not sure if it's before or after the halfway mark. It will rear up, and spin around, slamming its hooves into the ground where you are standing. Trust me, this is an attack to avoid. It can take out a third of your health easily. Just keep moving around it or move back a bit to avoid it.

Sometimes it will hit the ground sending a shockwave in your direction. This shockwave can throw Aeron out of the platform if you're not careful.

Also, almost immediately after you pull its Master Flesh, it will slash both arms out in front of itself. This is relatively hard to dodge, as you have to be in front of it to pull at the flesh, it happens almost right after, giving little time, and it has a wide arc.