Master of the Crimson Keep 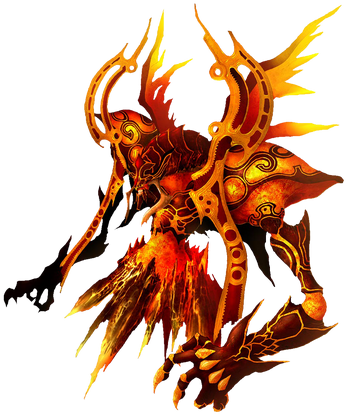 The Master of the Crimson Keep (Arba'ete Surtr) is generally an easier battle than the previous two Masters. He has a few attacks to watch out for, including one which may seem impossible to escape from, but like most of the time, all attacks can be evaded in some way. He is actually not on land like you are, for he is standing in lava. Therefore, he has very little movement available.

The Master Flesh is very obvious, and quite easy to grapple. You can damage him by grappling and pulling the Master Flesh or just yanking it with the Oraclos Chain. When you first arrive, he will appear to be sleeping, and this is a golden opportunity to deal large amounts of damage. As soon as you land on the platform after grappling over to it, grapple the Master Flesh and yank it out a few times. If you're quick, you should be able to deal a quarter of his life bar in damage. However, he will sink under the lava eventually, so if you're still grappled, let go. He will otherwise pull you towards the lava.

After that, it is much harder to reach the Master Flesh. Each time he dives under the lava, he will come back up covered in fire. There are five parts which have fire, and each part must be put out if you are to reach the Master Flesh again. To do this, simply grapple one of his hands, shoulders or his head. You don't need to pull or yank, for as long as the Oraclos Chain is hooked on the part will take damage. Therefore, the best thing to do is actually to grapple the other end of the chain to another flaming part. This will only damage the part grappled first, but it allows you to evade his attacks without worrying about the chain. The hands fall off the quickest.

Once all the parts have fallen off, he will slump over, revealing the Master Flesh, and giving you another opportunity to attack. It is better to pull from now on, for if you yank straight away he will get up immediately, with you losing a lot of time to damage him. Just yank away twice as soon as he starts to get up again.

At the start, this Master's attacks aren't too much to worry about. The first one will be annoying if you are trying to hold the Oraclos Chain rather than grapple it to another part. He simply creates a column of fire where you were last standing. If you're holding the Chain, this can be hard to dodge, but otherwise just keep moving.

The second attack is one where he will create a sword of fire in one hand and sweep across that half of the ground. This is easy to dodge for you get enough warning and it isn't too fast. Just run to the side of the hand that isn't holding the sword.

His other attack isn't so much an attack, but it is the most irritating of all. He will create a number of purple floating orbs (usually 3 or 4), which will then move to the center and combine. You must try to grapple all of these, for these orbs will set one part of him back on fire per orb that isn't destroyed. Even worse is that you have a very small time to destroy them in. You can't grapple one until he has finished creating all of them.

After he is down to about half his health, it will zoom in on him like the previous Masters, showing that he is getting more powerful. After this he will have one new attack and two of his other attacks will be upgraded.

From now on, instead of just creating one column of fire he will create a few, one after the other. This isn't too much to worry about since they won't move too much either way, staying pretty much in the same place.

His sword attack also gets a boost. Now he will create a sword in each hand is wing them both at the same time, crossing over to the other side and covering the entire small area. At first, it may seem to be impossible to evade. However, there are five rock stalactites hanging from the ceiling, one of which you grappled to to get onto the platform. Just grapple to one of these when he prepares to attack and it will miss completely. You can grapple him from up here, but I don't recommend it. It might work, but I didn't want to risk it. If you grapple the pillars too early, he will attack in the air, instead of on hte floor, so timing is of the essence.

His brand new attack is a slight nuisance, nothing more. He will pound the ground with his fist, creating a pillar of fire which moves toward you. This is easy to get rid of. Simply grapple it, and it will disappear.