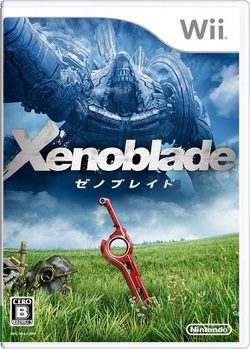 Xenoblade Chronicles (known as Xenoblade in Japan) is a role-playing video game published by Nintendo and developed by Monolith Soft for the Wii console. It was the first game in Operation Rainfall to actually be localised in America. It tells the story of a young man named Shulk who sets off on a journey to defeat the machines known as the Mechon for revenge, for they killed his closest friend, who was a bit more than just a friend.

The game takes place in a world consisting of the dormant bodies of two giants known as the Bionis and the Mechonis, beings which appeared to die during a great battle. The Bionis represents life, and it is where Shulk, the Homs and a number of other species live, such as the round, furry Nopon. The Mechonis, however, is an entirely mechanical being, inhabited by machines such as the Mechon.

The game offers at least a hundred hours of gameplay, but the gameplay, music and story are all so amazing that you will quite possibly want to play it again and again. The game includes hundreds of side-quests, as well as a number of collectables to find at each of the 20 or so large areas. There are no invisible walls, so you can jump off a cliff, dive into a lake or climb that mountain you can see in the distance. The game has some spectacular sights, and it is a treat just to explore the land at sunset, seeing how the setting sun lights up the landscape.

Read more about the game at Xenoblade Wiki, and if you do end up getting the game, don't forget to help out the Wiki which may have been the very thing that convinced you to get it. 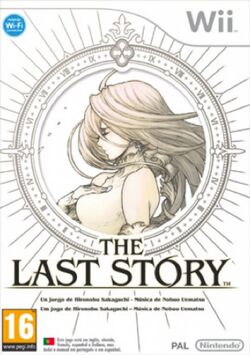 The other game in Operation Rainfall, which is soon going to be localised and released in America, The Last Story is a JRPG created by Mistwalker for the Nintendo Wii. It is a game which has both an engaging story and wonderful gameplay. It tells the story of a group of mercenaries who find themselves caught up in plots for power and manage to make some powerful enemies for themselves. Zael, the main protaganist, recives a mysterious power while on a mission in a cave. He then meets a girl named Lisa who seems different to normal people; she had never been to a market before and didn't understand the concept of paying for food. From there the story becomes more and more complicated, ending with an unforseeable twist.

The gameplay, while fairly simple to begin with, involves the characters acting in different roles; mages, healers and swordsman. Not only this, but the power Zael recived has a great role in combat. This power, called Gathering, will draw the attention of all foes to Zael, allowing mages to cast their spells quicker and swordsmen to get in some attacks from behind, changing the flow of the battle. This power also allows Zael to revive fallen allies. Although most of the combat involves auto-attacking, Zael can use abilities such as Slash, which deals extra damage, and Gale, which sees him rushing towards a chosen spot to deal damage to surrounding enemies and diffuse magic circles, causing different effects.

The Last Story also includes an awesome multiplayer mode whch allows you and up to five other players to either fight each other or team up to take on an extra powerful version of a boss. You are able to choose from the many characters from the game, even enemies, so you are able to experience spell-casting or head to head combat for yourself.

The Last Story Wiki still needs a lot of work, and is currently lacking contributors even more so than Pandoras Tower Wiki. However, even in its incomplete state it still provides more than enough information to convince you to get this intriguing game.